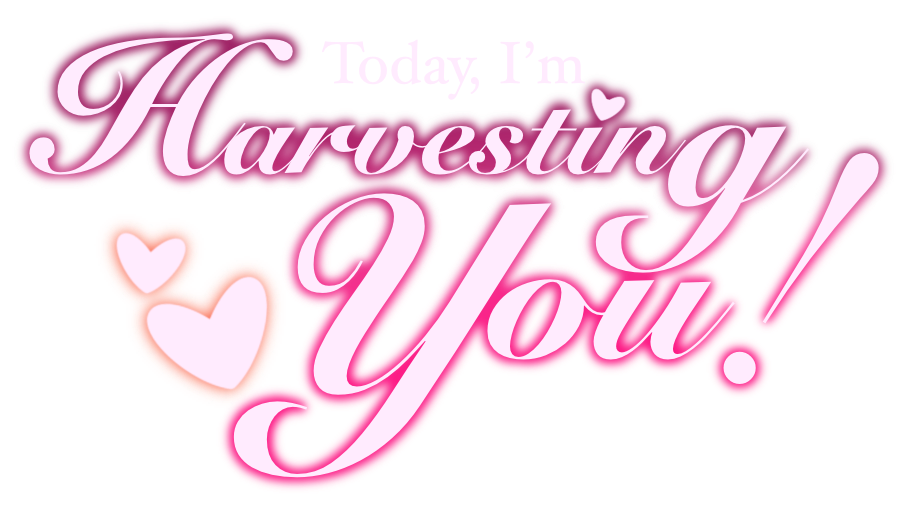 Very poor and very tired of being single, you set out for your day with one goal: change both of those things, no matter the cost!!

KNOWN BUGS NOT FIXED FOR THE JAM:

1. The web build often doesn't play some SFX. Dunno why.

2. Uhhhh, there might be some sprite placements that aren't right. Sorry! We ran out of time to QA last minute changes.

3. The point and click can be a bit buggy with what goes off where. It's mostly because I drew the art assets like an idiot <3

4. I also left in the wrong instructions in game. Whoopsie!

collector is so cute

That was so stupidly sweet... especially considering everyone we actually dated ended up dead. I quite liked the feel that it was a reverse dating sim. As in, it was the characters trying to seduce me. Y'know... or die.

Gideon was such a sweetie. Seeing his expression fall as we talked about how hopeless we felt dating broke my damn heart...

I FELT SO BAD HARVESTING JUN. I WANT SOMEONE TO ACTUALLY FLIRT WITH ME LIKE THAT. And the fact that he was still so dang cute, even as I killed him. It's just a shame he rolled a Nat 1 on Persuasion after that Nat 20 at seducing me.

Dante made me feel the least terrible, which isn't actually much. I found him weirdly charming. He could tell we were bad news, but he still took his shot. Commendable. I felt the worst when I was actually offing him, though. Poor baby.

...didn't mind my 'Completion Bonus' though. Collector's my favourite.

Why did I immediately fall for the Collector when I was supposed to go on speed dates? ;;

Reply
Fisher :b8 days ago

fdsjlksfdj their all so cute omg this game is adorable, the art, the convos, the actual harvesting, and the Collector. 100000/10

please i need to be with the collector dude like why is he so fine.

I just know the grandparents would super approve of the Collector. I'm gonna headcannon that when MC eventually wins them over, the grandparents are gonna like 'em the most of anyone MC's brought home <3

i loved the art and everything about this!

But fr that was a really really good game I loved all the characters, I had fun playing, and really the collector like bro he's just overall great guy like I love him sm.

I LOVE THIS GAME.
Gideon got me in my feels cuz he reminds me of one of my fictional bfs lol (I kissed Gideon uwu)
The 2nd guy is exactly my type however he looks like my ex so i harvested him HAHAHA
The 3rd guy is pretty hot
The collector: THE HOTTEST ONE ISTG

Nice art style, quick game, unique take on dating sim, liked the idea to be the spooky one.

Although I was hoping for a different ending, depending on if you take all/unecessary organs.

the collector is my #1

i wanna fock the collector ASIDJMSWKSC

dante had me blushing 😳

with all due respect

and i dont mean to be rude

but i would die just to fvck the collector-

I THOUGHT IT WAS JUST ME HAHA

Ngl the Collecter is a bit…

Went back in to harvest Gideon after learning we never see him again.

All the dateable characters are so cute, 10/10 would play again, this is a game I can see being neverending and still being enjoyable.

I really like this game , the dating /horror twist was really cool.

Dante and the collector it's just so....

i've never seen a protagonist being a villian before, love the art style, and I like the harvest minigame, 10/10 would play again

I really loved the visuals, the characters, the writing, the music is great but I don't know if it's a bug or intended, but the date music plays at the same time as the mini game music.

The character are just so cute! Mostly our boss whenever I try to get a new ending, I just see a new side of him! (ToT)

I also do not understand Gideon's ending. I would like to understand it.

The game was sweet but short, with nice visuals and atmosphere.

I would've liked it a little more if the player could choose to simp for the collector as opposed to the main character simping right off the bat, but that's just a personal pet peeve tbh.

Overall I love the idea. Very cool and unique.

When first meet with Jun i thought his upper lip is the pink mustache :cry:

i need more the MC girl with the collector <3

Gonna do anything for him fr.

i loved the game so much. one thing, my brother's name is dante. i love the dante in this game but i dont really like my brother. 10/10 will play again

I did really enjoyed this game. Very factual within the context and great story line.

They literally put as a dateable character in this game. Help.

My name is literally Jun, I wear glasses, I’m asian, I like roleplaying games, albeit I only have some programming skills but I’m super nerdy.

THEY STOLE MY LIKENESS FOR THIS GAME!!! SUED!!!

Jokes aside, It was uncanny seeing a man not unlike myself in a horror dating sim about harvesting organs. 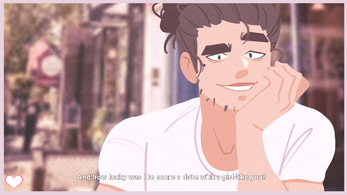 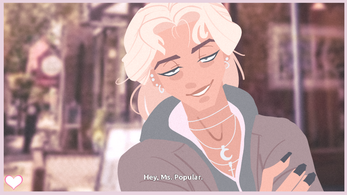 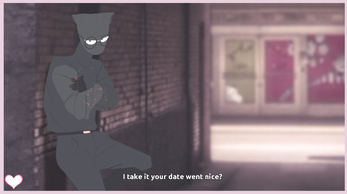 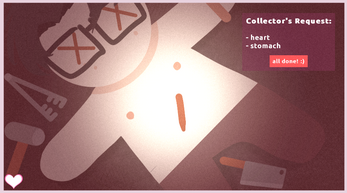